Last night, before I left work, I drank a million cups of coffee. Consequently, I couldn’t sleep for shit last night and woke up at 5:20am this morning. Being as I had about 8 hours until I had to be at work, I figured I had time for a long, relaxing, luxurious shave.
And being as I am of the opinion that indulging in Fall seasonal items will eventually give this long oppressive Summer the hint that it has worn out its welcome, I decided to go full-out Fall with today’s shave, using two new items I haven’t even used yet!

This is my new “Pumpkin Spice Shave Stick” from Mystic Water Soap.
I know most of my 5 or so readers probably are not into “wet” or “traditional” shaving, so I will attempt to briefly explain how a shave stick works.
A shave stick is a stick of shave soap. The nice folks at Mystic even put it in a tube for you, unlike some other shave sticks, like Arko or Palmolive. You rub the shave stick on your wet face, leaving a film of shave soap behind, and then face-lather with your brush, which just means you rub your shave brush over the soap, creating a lather.

I ordered this shave stick based on reviews I read online at Badger & Blade and elsewhere. Namely, that this pumpkin spice scent was actually closer to a “Pumpkin Pie” scent, as it had more sweetness and less spice than some others. I also read that Mystic is an artisan soap maker, which basically just means it’s one person, in their house, making this stuff and selling it on the internet.

This shave stick is also tallow-based, meaning it contains animal fat, so stay away from it if you are vegan. Unfortunately, tallow makes for a superb shave soap, producing a thick lather with incomparable slickness.

This shave stick did not disappoint. Upon opening, my nose was met with a sumptuous scent of pumpkin pie. It was, true to the reviews, heavy on the sweet and vanilla, but with distinct pumpkin and spice notes also.

I loaded a new Feather blade into my Merkur 34c and put my brush in the hot water to soak. I used my Parker Black Badger brush, which has swiftly become my day-to-day workhorse brush.

I wet my face and rolled a little edge of soap out of the tube. 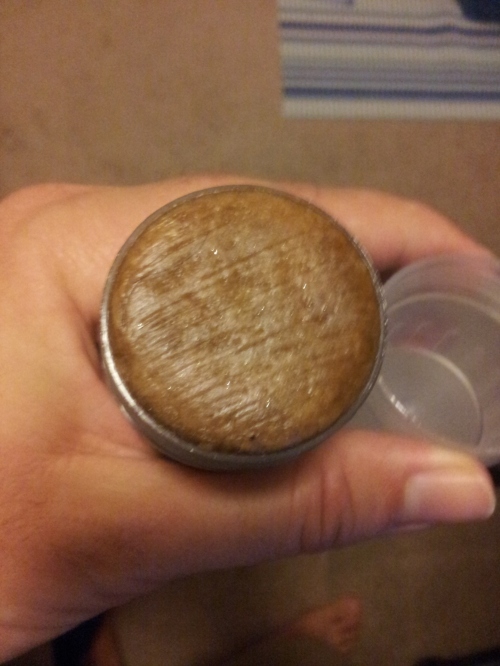 Ok, let’s be honest. This was the most unpleasant part of this morning’s Fall shave. It looks like a turd. If you showed me the picture above and said, “Look at this guy holding a turd!” I would believe it. Sure, it also looks like pumpkin pie, but maybe a little browner, and thus a little more on the turd side of life.
Two things about when I began to rub it onto my face:
1. I got a strong odor of oatmeal cookie that wasn’t there when I first opened it. This isn’t a bad thing, but the sweetness really blossomed once I started rubbing it on my 2-day scruff.
2. It didn’t stop looking like doodoo. Once again, if you showed me a photo of my face post-rub and pre-lather and said, “Look at this guy with shit on his face!” I would definitely believe it. Sort of an orange-ish brown film was now on my face, kinda grossing me out. Of course, I don’t know what else you could expect from an all-natural pumpkin-spice soap, so there’s no helping that.
Not that it matters anyway. This portion of the shave lasts less than a minute until it’s on to lathering it up and really seeing what kind of performance it is going to deliver.

I fished my soaked brush out of the basin, shook it a couple times to get rid of the excess water, and began lathering my face up…

Magically, my thin film of Doo Doo Brown was turned into a massively thick and chunky lather, that smelled like heaven to me, as a person who, like a lot of people, is completely enamored with pumpkin anything.

And this is after three passes!

I got so much lather that I actually did a 3-pass shave, whereas I normally only do two (a 3-pass shave is basically where you shave 3 times in a row).
The lather was so thick, so rich, so sweet-smelling, and so slick that I kinda had a hankering to just keep shaving all day, over and over, culminating in the unheard-of 100-pass shave.
Seriously, I can’t recommend this shave stick enough. Even if you aren’t into the wet-shaving hobby, and make no mistake, it is a hobby, it may be worth it to get one of these sticks and a cheap brush, just to immerse yourself in damp leaves, plastic, cool air, distant cries of “trick or treat!” and hot pumpkin pie just for a few minutes. A nice escape from the oppressive heat and humidity of the Deepest South, in other words.

I think the only thing that kept me from shaving for forever and ever and ever, into perpetuity, was my excitement over using my new “Jack-o-Lantern Pumpkin Whiskey Aftershave”!
I’ve had this stuff for several weeks now, and have yet to use it because I was waiting on just the right moment. That moment came at roughly 0600 this morning, on an already-hot August day.

I got this stuff from Nevermore Body Company and, unfortunately, it was the last one they had listed on etsy.

Post-shave, I hit my few nicks with an alum block and shook out a small puddle of the Jack into my palm…

As you can see, it has a sort of milky appearance. I should note that, like many artisan aftershaves, you need to shake this stuff up before using it, to properly mix all the ingredients.
The milky appearance was a little off-putting, but the scent was heavenly. A stronger spice presence than the soap was definitely there, with cloves and cinnamon in the forefront, a little pumpkin in the middle, backed by a slight whiskey chaser.
I rubbed it between my hands and applied…

YEE-OWCH! This was certainly a strong burn, which I guess could be attributed to the presence of both whiskey and cinnamon. It didn’t last long and I honestly enjoy a nice burn with my aftershave. It lets me know it’s working and I find it refreshing, in a weird way.

The scent went on strong, but didn’t overstay its welcome, lasting only in my nose. It’s been two hours, and I am only getting occasional whiffs of pumpkin and spice, which is just how it should be, in my opinion. My face is still very smooth and tight, but not too tight like you would get with an alcohol-heavy aftershave. I don’t feel like I’m gonna tear my skin just by talking, in other words.

OVERALL:
I highly recommend both of these products to anyone and everyone! Ladies, there’s no law that says you can’t use this on your legs. I’m really hoping that Nevermore will have more Jack-o-Lantern aftershave this year so I can stock up and enjoy what my buddy VeggieMacabre calls an “October Sunday” occasionally throughout the year.

If you want a smooth, slick shave with a scent that instantly transports you to Halloween night (and who doesn’t want that?), seek out these products immediately!

7 Responses to A Very Fall Shave